Danger after the bite:

1) Ensure you and the casualty are safe and the snake is not still close.

2) As far as the snake is concerned – do not attempt to kill it as this may be dangerous. However, if the snake has already been killed, it should be taken to the hospital with the patient in case it can be identified. However, do not handle the snake with your bare hands as even a severed head can bite up to one hour after its death!

4) Check that the casualty did see it was a snake that bit them. This could be a rodent or Lizard or even a thorn. 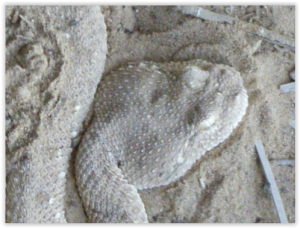 Some people who are bitten by snakes or suspect or imagine that they have been bitten, may develop quite striking symptoms and signs even when no venom has been injected. This results from an understandable fear of the consequences of a real venomous bite. Anxious people may over-breathe so that they develop pins and needles of the extremities, stiffness or tenderness of their hands and feet and dizziness. Others may develop shock after the bite or suspected bite-faintness and collapse with profound slowing of the heart.

When venom has been injected; early symptoms and signs 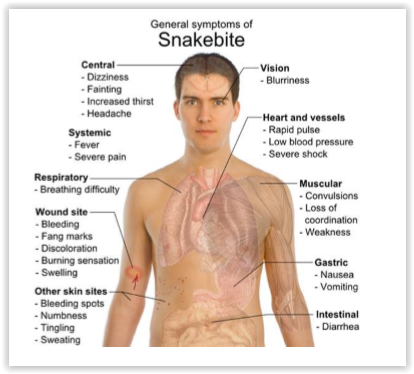 Local symptoms and signs in the bitten part:

Snakes may have a mixture of toxins to make up their venom. There are approximately 20 types of toxic enzymes found in snake poisons throughout the world known to man. Although no venomous snake has all of these toxins, most snakes employ between six to twelve of these enzymes in their venom. Each of these enzymes has its own special function. Some aid in the digestive process, while others specialize in paralysing the prey.

(It is noteworthy that the size of the snake or venom fangs is in no relation to the virulence of the venom.)

“Venom of these snakes acts as an anti-coagulant that could lead to excessive bleeding, necrotising (death of tissue), and anticoagulant (preventing the blood from clotting)

All species in the family Viperidae, the viper has large venom is aggressive and are capable of injecting large quantities of venom.

The elapines, short front fangs (Proteroglyphs) snakes, which include the cobra, mamba, and coral snakes, their venom is neurotoxic (nerve toxins) and paralyses the respiratory centre.

Monovalent / polyvalent antivenom Snake antivenom can be classified by which antigens (venoms) were used in the production process. If the hyperimmunizing venom is obtained from a single species, then it is considered a monovalent antivenom. If the antivenom contains neutralizing antibodies raised against two or more species of snakes, then the composition is considered polyvalent. Snake Antivenom is a mixture of hyperimmune globulins and other proteins obtained from the serum of animals (horses, sheep) that have been immunized with the venom of a snake.

WHO Guidelines for the Production, Control and Regulation of Snake Antivenom Immunoglobulins.

The hospital will test you first to ensure there is no reaction before injecting Antivenom, also protection from anaphylactic shock. It should be given intravenously, through a drip set.

If you would like to down load a copy please click here, ( note We will keep the PDF updated)